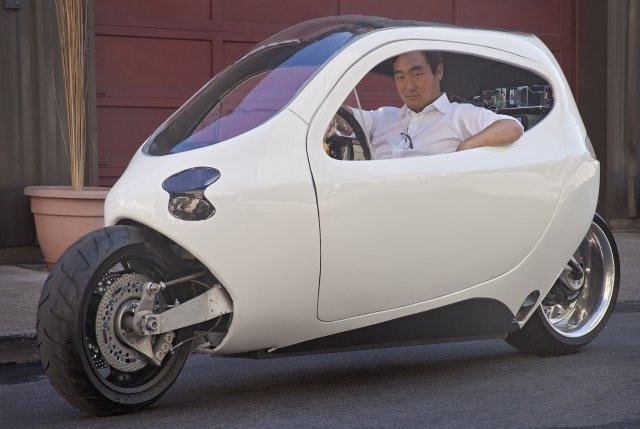 Finding greener, cheaper, and cleaner alternatives to our currently costly and dirty fossil-fueled vehicles, especially for personal transportation, is imperative in the very near future, and it’s a tricky challenge, because we Americans love our cars and trucks.

We don’t really care to carpool or take public transit when we can be completely in control of our own vehicle, which often serves as a mobile storage unit for anything and everything, as well as a home away from home, and it’s hard to have to share a vehicle, or depend on someone else to drive us. So ultimately, even in the best of worlds, we will probably all still need our own vehicle, but it doesn’t have to be a big four-wheeled car, and it doesn’t have to run on gas or diesel, either.

When it comes to getting around, the most economical, most efficient, and most environmentally-friendly method of transportation is the humble bicycle. The two-wheeled form factor of a bike or motorcycle is small and easy to park, store, and navigate on, which is especially important in urban areas, where space is at a premium. But let’s face it, even if we love riding our bikes, and can commute by bicycle for most of our transport needs, we’re not all going to ride our bikes all of the time. And the same goes for motorcycles, as they are still exposed to the elements, and require a different set of driving skills than a car or bike does plus unlike car accidents, motorcycle collision victims do not have a steel cage to protect them.

Being able to be out of the weather when it’s really hot or cold or wet, and being able to carry stuff with us, and being able to get to the other side of town quickly all really have their appeals, so an enclosed two-wheeler, especially one with some of the creature comforts of a car, could be the personal transport of the future.

The C-1 electric motorcycle, from Lit Motors, just might be the first of a whole new breed of vehicles, because it combines the best of both worlds (the small size of a motorcycle and the stability and enclosed nature of a car), and is efficiently and affordably powered by electricity, which also produces no local emissions or pollution whatsoever.

One of the defining features of the C-1 is its ability to stand upright on two wheels, thanks to a gyroscopic stabilizer system, which means that the driver doesn’t have to balance it, either while stopped or while turning, and the little vehicle is also said to be able to remain upright even after a collision.

The other is the fully enclosed body, which features seat belts, air bags, and a steel-reinforced chassis, as well as a climate control and audio system, which can haul not only the driver and a bag or two, but can also fit a passenger in as well.

The third feature is the electric motor and energy storage system, which is capable of propelling the C-1 up to 100+ mph (0-60 in 6 seconds) for a range of about 200 miles on the 10kw battery pack. The company estimates that the little electric vehicle gets an astonishing 674 MPGe, which just blows other transport alternatives away, and at an expected retail price of $24,000, the C-1 is well within reach of many buyers.

The system is said to take a full charge in about 6 hours (at 110V), or a partial charge (80%) in much less time at a DC quick-charge station. According to Lit Motors, it costs an estimated $1.25 in electricity for a full charge, and nets the driver a per-mile cost of about $.06. Assuming an average driving distance of about 13,476 miles, the total cost for “fuel” and ownership per year would be less than $85.

The only bad news about the C-1, that I can tell, is that you can’t just run right down and buy one immediately. The Lit Motors team has been prototyping and improving the design for the last couple of years, and are getting ready for production, so you can reserve one, which may be built as soon as this fall. And be sure to check out some motorcycle accessories for your new ride.

[Disclosure: This post was written as part of Progressive’s Apron Project, helping tell the story of people and their initiatives making progress towards a greater good. I have been compensated as a contributor to this project, but the thoughts and opinions in this post are my own.]