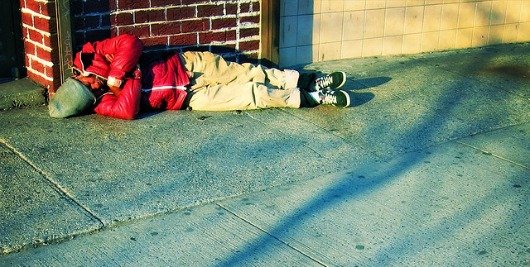 Well, not the same guy. But the same type of guy.

Down on his luck, needing a helping hand.

Not down and out, drunk or wasted, insane or mentally disturbed. He’s generally a sober guy, about my age (40-ish), and looks to have done a lot of physical labor in his life.

And he recognizes something in me – I’m an easy touch for a handout, and it shows, maybe. I’ve been in need enough times to know the value of people helping people, I believe being generous is one of the traits of a good man, and I give when I can.

So when I’m approached by him, asking if I have any change to help a brother out, I don’t hesitate. I start digging in my pockets, looking for something to give him, and since I generally have a couple of bucks in cash on me, it’s easy for me to offer him some money.

When I hand it to him, he usually says “God bless you” or something along those lines, and I answer “Take care, brother”.

But I don’t spend a whole lot of time talking to him, or asking him what he needs, or what his name is, or anything about him.

And I realized how much I identified with the giver in those exchanges, how much I needed to be the guy who was helping, if that makes sense. As if I might not do those things if I had to give anonymously, or without him knowing.

It made me feel really foolish, and I decided that I was gonna try to be different in that respect in the future. It wasn’t as hard as I thought it was gonna be.

I ran into that guy the other day. And instead of making eye contact and waiting until he approached me, I walked over to him, asked him what his name was, and shook his hand.

His name is Dave. He’s out of work, says he can’t find a job in this town.

I ask him what he does, and he says he studied automotive repair, and knows construction. I tell him I don’t know of any jobs for him, but that I will keep my eye out for him.

I don’t have any cash on me at all that day, but he doesn’t ask for any. We have food, but when we’ve offered him some in the past, it’s obvious he wants cash rather than a couple of bananas, so food isn’t a big issue for him.

We talk about the weather and the economy, then I shake his hand and tell him “Take care, Dave. See ya around.” and head off back to my reality – returning home from the grocery store with the family to unload our huge food haul.

My wife asked me where I went, if I went to the coffeeshop during that time, and I said “No, I was talking to Dave.”

“Yeah, Dave. You know, the guy who’s always sitting outside the store? His name is Dave.”

I’m still wondering how I can really help Dave, other than the usual handouts.

But I thought that maybe I can help by convincing at least one of the people who read this to really connect with that guy, to ask him his name, to look into his eyes and acknowledge that he is a part of this big human family. That he’s not a number, a statistic, or a stereotype.

And then figure out how to really help him.

6 thoughts on “His Name is Dave”