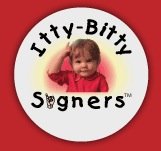 I am obsessed with using sign language with babies and young children. I admit it. I will probably talk the ears off of anyone who asks me about it. It is my passion.

When I think back to how it all started I realize now it was a slow process. Don’t get me wrong, I always found American Sign Language interesting — I had taken a class out of high school, thought the language was beautiful and had hoped to learn more — but until my daughter was born, it was just something I was attracted to but never found the time to pursue further.

Then my daughter happened. My husband and I considered ourselves seasoned parents: I had a 16 year old son from my previous marriage and he had an 11 year old daughter from his. Still, we prepared in the usual way: we read all the baby books, took Bradley Birthing Classes, brushed up on breastfeeding, and baby-proofed our home. We thought we were ready. We could not have been more wrong.

Our daughter entered the world screaming and didn’t stop for 4 months. I kid you not! She didn’t sleep, barely ate, had zero patience and the lowest threshold for frustration known to man. Desperate to find something to remedy this, I recalled seeing Dr. Harvey Karp on a show talking about his method of soothing babies, so I did a quick Google search and was thrilled to find his Happiest Baby on the Block DVD on Amazon. I was less than thrilled to discover it was on back order for 6 weeks. In the meantime there was another product recommended called Sign With Your Baby. It said signing reduces frustration and lessens tantrums. That was all I needed to see…I was sold! I purchased the product and began reacquainting myself with baby sign language.

Signing was a Godsend. Naturally, our daughter did not sign back right away; however, by teaching her signs we at least felt like we were being proactive in our attempts to help her communicate. We saw signing as a light at the end of a tunnel that would eventually enable her to express herself effectively. And we were right. She took to it like a duck to water and soon she was happily signing what she needed rather than whining and crying.

I remember well the day I knew that I wanted to share the gift of baby sign language with others. I was working on the computer when my then 15 month old walked up to me and out of the blue signed “DADDY, DANCE.” It drove me to happy tears. You see, our daughter was breastfed and my husband was concerned that she wouldn’t connect with him on a deep level since he wouldn’t be feeding her. His answer to that was to slow dance with her as part of the bedtime routine. After bathing and changing her, he would dim the lights, put on the song “Father Be Good To Your Daughters” and slow dance with her until I came in to nurse her to sleep. He did this just about every night from around the time she was born. It may have taken 15 months, but after I told my husband what his baby girl had signed, there was not a doubt in his mind that their time together was more meaningful to her than he could ever had imagined. If we had not signed with her, we would have missed out on that moment. What a loss that would have been.