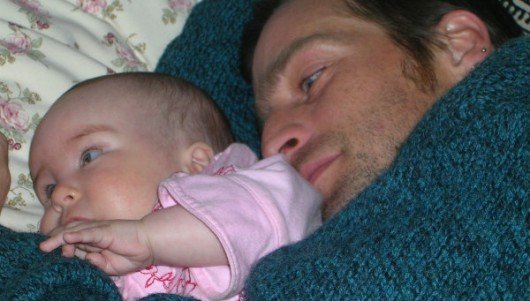 “You really let your baby sleep in the same bed with you? Isn’t that dangerous?”

Before our first child was born, my wife and I discussed co-sleeping, and I have to admit that I wasn’t so sure about it. I read about the basics, the pros and cons, and intuitively, it seemed right. But when I thought of actually having the baby in bed with us, I had some reservations. After some serious study of the issue, and talking to others, I eventually came around, and now, I can’t see doing it any differently.

My wife and I have been co-sleeping with all of our children for almost 12 years (one at a time, though, not all of them at once), and I believe that if you can disregard the negative bias of the mainstream media when it comes to natural parenting, and trust your own instincts, co-sleeping is beneficial to the entire family.

New dads and expectant dads have asked me numerous times about co-sleeping, so I’ll attempt to address their concerns here and shed some light on the perceived dangers of the practice. Before I start, remember that I’m not trying to convince you that you need to co-sleep, or that it’s wrong if you don’t. Co-sleeping is a personal preference, and is definitely not for everyone.

Will we roll over on top of our child and smother them?

Here’s a little test for you: Grab a couple of tennis balls, or a 10 pound bag of rice, throw it in your bed, and see if you roll over on it without waking up. Chances are, unless you’re drunk or high, you’ll be aware of something next to you and can adjust your position to accommodate it. For new dads, putting a rolled up towel between you and the baby at first can help to train you to be more aware. For more on that topic, see Cosleeping and Overlaying/Suffocation, from the University of Notre Dame’s Mother-Baby Behavioral Sleep Laboratory. And if you’re extremely overweight, or drunk or wacked out, please don’t co-sleep!

But I don’t want the baby to wake us up throughout the night.

I hate to break it to you, but your child is going to wake up in the night, sometimes often. Studies have shown that babies who sleep next to their mothers are better sleepers and have less stressful experiences during the night. Mothers who wait until they hear the baby cry from the other room have to get out of bed and comfort the child and then nurse them back to sleep (and only then can they return to bed). Contrast that with a mother who can nurse the baby without ever leaving the bed, and without letting the baby get vocal enough to wake you both up. So co-sleeping can be better for the sleep patterns of both mother and child.

If there’s a baby in our bed, won’t that keep us from being intimate with our partner?

Only if you let it… I wouldn’t ever advocate ‘adult’ activities with your child between you, ’cause that’s just silly. But like they say, where there’s a will there’s a way. Co-sleeping doesn’t have to mean the child is always between you. You can always put the baby to sleep somewhere else and bring him into bed with you later. Or get creative and take your love life outside of the bedroom.

Yes, babies can be messy. A wool soaker pad under the baby (covered with a baby blanket) keeps bodily fluids from soaking into your mattress, and are easy to make from a wool blanket. Simply cut to size, and while you’re at it, cut several smaller pieces for the diaper bag to use as changing pads.

The baby will fall out of bed.

We sleep with the baby between us, but for some couples, that doesn’t work. Use a rolled up towel as a barrier until the baby is old enough to roll over regularly. Push your bed against the wall if you need to, or purchase (or make) a bed extender (kind of like a mini bed that attaches to yours, effectively enlarging the bed enough for a baby).

But won’t the child get ‘addicted’ to sleeping with us? How will we transition them to their own bed when they get older?

We’ve found that as a child gets older, they tend to want their own space, and getting a bed of their own is an exciting thing. Kids who feel secure at night as a result of co-sleeping may have an easier time transitioning to a ‘big-kid bed’. There might be some opposition to having to move out of the family bed when a new baby comes, but you’ll have plenty of time to get them used to it during the pregnancy (and it’s only one of many issues that come up when having a younger sibling come into the family).

I have to admit that I envied the closeness that the mother enjoys with the baby, but co-sleeping helped to allay that, giving me a greater sense of connection with our children. There’s nothing like waking up to the sweet smell of baby’s breath, or having them snuggle up to you in the night. Co-sleeping has strengthened the bond I feel with our children, and if you feel drawn to it, I recommend giving it a try. You probably won’t want to give it up afterward.

A word of warning to dads: As kids grow bigger, their feet are right at the level of the family jewels, so if you’ve got a kicker in the family, you might need to sleep facing away from them (or risk a painful awakening).

A caveat: Co-sleeping on a couch or a water bed is not a good idea – most, if not all, co-sleeping advocates warn against it. And it’s not for babysitters or non-parental caregivers, either.

Many families around the world sleep in a family bed, and humans have been co-sleeping for thousand of years. Putting our kids in separate beds is a relatively new concept, and one that no doubt sells lots of cribs…

Don’t take my word for it, though. Read what Dr. Sears, MD, a father of 8 children, author of 30 books on childcare with 30 years of pediatric experience, has to say about co-sleeping: Co-Sleeping: Yes, No, Sometimes? | Safe Co-Sleeping Habits Every Parent Should Know: Do’s and Don’ts

And be sure to read this guide to co-sleeping over at Cosy Sleep.

45 thoughts on “Co-Sleeping with Baby: Attachment Parenting for Dads”