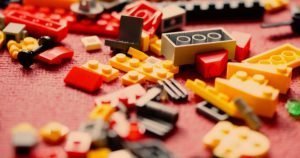 Although millennials may be waiting longer to get married and start a family, they’re certainly not forgoing these experiences entirely. What’s more, this generation tends to be more purposeful in the way they achieve these milestones. Parents in their mid-20s to mid-30s want the best for their kids, which includes prioritizing a better world for them to grow up in. And while they know that toys can play a critical role in their children’s development, especially during the first year when a baby’s brain more than doubles in size, they want to know that the toy companies from which they buy products are doing their part to protect the planet. Painting might be the most popular art medium, but it’s not the most sustainable activity. Beloved toymaker Lego has answered the call, announcing that their newest treehouse kit will be made with plant-based materials, while the company’s goal is to make all its products entirely sustainable by 2030.

Although plastics can be found nearly everywhere, thanks to all kinds of processes including reaction injection molding (wherein two liquid components are mixed and injected into a mold to chemically cure), the majority of those plastics are not produced or disposed of in sustainable ways. That’s prompted companies across a plethora of industries to create plastic alternatives sourced from more eco-friendly materials. Lego revealed a new type of brick last year that uses sustainably sourced sugarcane to create a polyethylene material. Although not all of Lego’s bricks would be made using this method, the newest kit contains 185 of these plant-based bricks. It’s important to note that this represents only 6% of the total bricks in the kit, but the release marks the most sustainable one from the company to date. Not even bricks made with stainless steel 304 could hold a sustainability candle this bright.

Even more encouraging is the fact that Lego is taking customer desires seriously. The idea for this new treehouse set actually came from a fan submission, which Lego accepts on their website. After receiving more than 10,000 community member votes, company officials selected it to move forward and be sold in stores. While Lego has had its ups and downs, its ability to survive circa now may come down to its willingness to innovate and to evolve, despite the fact that the core use of their toys has remained unchanged.

As Jackie Breyer, the editorial director of The Toy Book and The Toy Insider, told NBC News: “Millennial parents are more aware than previous generations of their impact on the environment. They feel the need to teach by example that they can make the world a better place. They are willing to pay more for sustainable quality toys than for cheaper toys that end up in a land fill.”

That idea is supported by data tracked by Nielsen, which revealed that environmentally conscious consumers have driven sustainable product sales up by almost 20% since 2014. Estimates show that spending on sustainable goods will reach $150 by 2021. Considering that the U.S. currently has 12.75 million manufacturing jobs in the workforce, companies that prove their commitment to sustainability will likely have a better chance of survival and improved employment opportunities in the coming years.

Even if sustainability isn’t your main concern when shopping for toys, it’s easy to admit that this small change can make a product more appealing. That said, even sustainable plastic will still hurt when stepped on — so make sure your kids clean up their Legos, whether the bricks are plant-based or not.