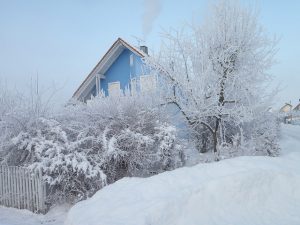 Before you know it, summer will be over and you’ll be firing up your trusty old boiler once more. The only thing is, it’s getting more and more expensive to keep your home warm, so here’s a few ideas to help you to stay cozy without worrying about your bank balance.

The best way to get cheap home heating oil is to buy early – then you’re set for the winter. Although there are loads of factors to the price of oil that even the average economist would find puzzling, the best rule of thumb is that the price of a commodity rises as demand does. This means that the early bird catches the cheapest worm. “Early” will vary by region, but in Northern Europe, this means the end of August or the start of September.

Turn down your thermostat

Most modern oil heating systems have sensitive thermostats and you can save a lot of money by turning yours down by just 1ºC. Just this barely noticeable tweak could save you up to 10% over the course of the winter. If you do feel the difference, then put on a jumper!

It’s important to get your boiler serviced regularly, as many may run at temperatures of 80-90ºC, which is just ridiculous and leads to many people turning them off and back on because the house is too hot. This is simply wasteful and you can remedy this by setting your boiler to run at 60-70ºC for slightly longer periods, giving you a steady, gentler heat at a reduced cost.

Service your boiler at least once a year

It can’t be emphasized enough – you need to have your boiler looked at every autumn at least to make sure it’s running as efficiently as it can. Even a small drop in efficiency will cost you dearly over the course of a winter, so it’s worthwhile. It also means you face less risk of the boiler breaking down during the coldest week in human history…

So you’ve serviced your boiler, bought cheap oil and you’ve turned down the thermostat to 20ºC – great. The downside is that those leaky windows and the drafty loft are letting all that precious cheap heat right out, meaning you’re often tempted to bump up a degree or two.

No house is 100% insulated, but there are hotspots (‘scuse pun) of heat loss – the walls account for 35% of heat loss, while roof lets 25% out. Then there’s the floor, the windows and random drafts making up the rest.

By using effective insulation – double glazing, loft insulation, draft excluders and so on, you can reduce your fuel use significantly.

Order your oil in bulk

Ordering as much oil as you can afford in one go is another good way to save money as delivering large amounts saves the distributor money, and this saving gets passed onto you. There are direct debit payment schemes for heating oil which might work for you if you buy late in the year, but this ties you into a set rate each month, so starting your search early is always the best bet.