While some people wear their hearts on their sleeves, one UK father is wearing it on his chest.

Martin Watts’ son Joey was diagnosed with supravalvular aortic stenosis as a baby. This type of heart condition is often detected early and Joey was no exception. At only 14 weeks old, the doctors were able to diagnose Joey with the illness, the same condition that his older brother has, but told the parents that there was nothing they could do for him at the time. 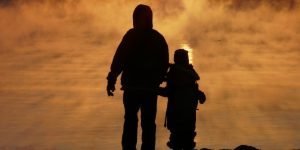 “From when they were first born, they told me there was nothing they could do, we would just have to live with it,” said Watts’ wife Leanne. “I was told they could both pass away at any given point. Joey’s condition progressed rapidly. They said if we didn’t try something now, the inevitable will be sooner rather than later.”

This type of birth defect limits the flow of blood to the heart. If the condition is ignored or otherwise left untreated, it can cause shortness of breath, pain in the chest, and even heart failure.

But as Joey’s condition worsened, the family was spurred into action. At only six years old, Joey had to undergo an eight-hour surgery to save his life.

And it was successful. Joey was discharged from the hospital only three days later and is now recovering at home. This is largely thanks to the advances in technology over the last few years. If a robot can place and solder more than 50 parts at a time or help with a complex surgical procedure, it should be used accordingly. As far as Joey’s next steps, he will likely need surgeries and medical care in the future.

Because of Joey’s success, the family’s older son is also scheduled to receive the surgery later this year. In the meantime, Joey is faced with a new scar running down the center of his chest, one that his brother will also adopt following his procedure.

Martin Watts knows the kind of impact scars can have on a child. To inspire confidence in his children and honor their courage, he didn’t hesitate to visit his nearest tattoo parlor. After a brief period of tattooing, Watts left the shop with a 3.5-inch tattoo that matched his son’s new scar. In addition to the scar tattoo trailing down the center of his chest, Watts also got an image of Joey’s heartbeat positioned over his own heart.

As a type of medical procedure in its own right, tattoos also need a bit of recovery time. Most artists recommend keeping the ink bandaged for at least two hours following the session. According to mother Leanne Watts, the new tattoo gives the boys confidence in their surgeries.

“It’s not easy for a 6-year-old boy or any child of any age to have that type of surgery,” she explains. “We’ve told him it should be something to be proud of, and he shouldn’t be ashamed by what has happened to him. [The tattoo] just shows him it’s nothing to be scared of and that he should be proud of what he has achieved in life.”

In photos for their interview, father and son were all smiles as they proudly displayed their chests. People smile more than 20 times a day, but this heartfelt tribute will keep Wyatt’s family smiling for years to come.