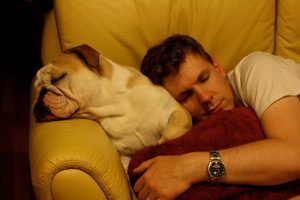 While most of the focus is on the baby and the mother after a new arrival, dads need some attention, too — in fact, one 2013 study noted that new fathers, not new mothers, experienced more sleep deprivation in the weeks following their baby’s birth. Even though they usually aren’t the ones feeding the baby during the night, they still suffer from daytime sleepiness and insomnia thanks to their new addition.

As you transition into this new period, know that it won’t last forever. Eventually, your sleeping schedule will go back to normal (or at least, somewhat normal). In the meantime, there are a couple things you can do to get a little more shut-eye despite being ruled by a new family member’s erratic sleep schedule.

1) Avoid caffeine late in the day

Yes, caffeine can provide a much-needed energy boost, but it can also interfere with your already fragile sleep-wake cycle. Drinking caffeine as many as 6 hours before bedtime can lead to a sleep onset delay, so if you need an energy boost, try taking a brisk walk or doing some light stretching instead. This will increase your blood circulation and boost your energy at least a little bit without disrupting your sleep later on.

2) Avoid foods that will keep you up

When we’re tired, we tend to reach for unhealthy snacks like simple carbohydrates (think white bread, potato chips, and white pasta). That’s because leptin, the hormone that signals our brains we are full, drops when we get fewer than 7-9 hours of sleep— and the “hunger” hormone ghrelin increases. Thus, when we’re tired, we tend to eat foods that will quickly satisfy but have little nutritional value. What’s more, some of these unhealthy foods can cause acid reflux, which keeps us up even longer.

Instead, try eating foods closer to bedtime that promote sleep:

3) Avoid Technology in the Bedroom

You were probably in the habit of checking your phone or emails before bed, but now that you’ve got a baby (possibly sharing your room with you), you’ll want to quit that bad habit. Not only does using technology just keep you awake for longer, but it also emits blue light, which inhibits melatonin production. For the purposes of this article, “technology” includes smartphones, e-readers, TVs, and any bright screen you might hold close to your face.

During the day, exposure to blue light in moderation is completely healthy; however, exposing yourself to blue light at night essentially signals your brain that the sun is still up and it’s time to be awake. If you use your phone as an alarm clock, put it out of reach so you’re not tempted to check it before bed.

When you have a baby, a lot of things can seem to slip out of your control— but your bedroom temperature doesn’t have to be one of them. A too hot or too cold room can lead to less time spent in REM and increased nighttime wakings, two things you can’t afford right now.

Studies show the ideal room temperature is somewhere between 68-78 degrees Fahrenheit (of course you can adjust this to your preferences). When our bedroom temperature is regulated, our bodies are more able to slip into their sleep-wake cycles and stay there.

Napping is one of the easiest solutions to daytime sleepiness, but if your naps are too long, they can mess up your sleep later, perpetuating a cycle of insomnia and tiredness. If you’re dedicated to the daytime nap, limit it to no more than 30 minutes. If you feel even more groggy after taking a nap, that’s a sign the nap is too long and you need to cut back.

It’s hard to swallow your pride when you’re a first-time parent, but sometimes asking for help from someone a little less sleep-deprived is the key to getting some stuff done (even if that stuff is just taking a nap).

7) Sleep on a Comfortable Mattress

If your mattress is more than 7-10 years old, starting to show sags, or leaving you waking up with pain every morning, it could be time for a new one. The perfect mattress for you probably won’t keep your newborn from waking up during the night, but it will at least give you a good night’s rest for as long as you can sleep on it.

As your baby gets bigger, you might experience sore muscles and aching joints from picking them up— in that case, choose the best mattress for back pain to support your weary muscles at the end of a long day.

Will You Ever Sleep Again?

A newborn’s sleep habits can be hard to pin down, but that doesn’t mean yours have to be! Following these tips for better sleep will help you on your way to more restful nights and energized days— and who knows, your good sleep habits might eventually rub off on your child.