There’s more to growing a beard than just not shaving. Sure, that will get you started, but if you want to up your beard game, then you’ll probably want to pick up a few beard products to go along with your face sweater.

One of the clearly obvious physical traits of masculinity is facial hair, and while many men choose to shave their faces daily, I’ve almost always been an advocate for whiskers.

Early in adulthood, I subscribed to the clean shaven grooming standard, mostly because I couldn’t really grow a full beard, but also partly because beards just weren’t cool (at least among my friends and coworkers). I wasn’t a very good daily shaver (lazy groomer, I guess), though, so my face was usually covered in stubble instead of a smooth expanse of skin.

However, when I entered my 30s, I let my beard grow out fully, and really dug the look and feel of whiskers — at least until I reached a period when the itch-factor overwhelmed my good sense and I shaved it off. That happened more than a few times, I’m sad to say, and while I never went fully clean shaven again (I was prone to bouts of goatees and soul patches, and even the occasional mustache, interspersed with many years of stubble), I didn’t embrace my full beard again until much more recently when I discovered the Dollar Beard Club Review which helped me maintain my beard.

In order to grow and love a full beard (even a trimmed one), there are a few beard tips and tricks that can help immensely in the process, not only for comfort and growth’s sake, but also for style and appearance’s sake as well.

At the top of the list for me has been moisturizing my beard and the skin under it, using either a good quality oil (coconut oil is my favorite), a beard balm, or a beard oil. Recently, I got a few sample products from BeardGains, including their Beard Balm and Beard Oil, which can go a long way toward not only helping tame unruly whiskers, but also help soften my beard and help it smell fantastic. After showering, I like to start with a little coconut oil on my hands, which I then rub thoroughly into the skin of my face under my whiskers, and then a dab of beard balm (which is a bit thicker than the coconut oil), which I also rub in and comb through my beard, and finally a few drops of the company’s Presidential Beard Oil, which adds a masculine scent with a “slight spice of heat with a fruit twist and cinnamon embodiment” to my beard. I’ve found that by adding this moisturizing routine to my beard’s daily grooming, I end up with a soft and manageable beard, without an overly greasy or oily feeling, which helps my beard to not only look better, but to also feel better, and to alleviate any itchiness or dryness, and there are other kind of oils, you just need to get one of them for use it. 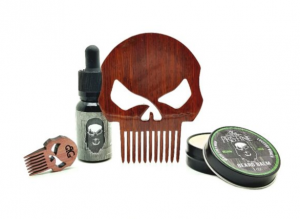 Another essential beard grooming product is a comb, which can help keep a full beard under control, while also helping to evenly distribute the beard balm and oil throughout your whiskers. It doesn’t have to be a dedicated beard comb, as any comb with wide teeth that aren’t too sharp can be used, but if you’re gonna fully embrace the beard, having a purpose-built beard comb is the way to go. BeardGains has a great selection of beard grooming tools, ranging from wooden beard combs in either raw wood or a high-gloss finish, in a wide variety of shapes (Star Wars, Wolverine, Game of Thrones, or brass knuckles, to name just a few), as well as mustache combs and boar bristle beard brushes. My favorite at the moment is the high-gloss Punisher beard comb.

Trim up that beard

Early in my bearding days, I let my whiskers grow up my cheeks and down my neck, which is a decidedly low maintenance technique, as it requires no shaving whatsoever. However, lately I’ve been trimming my beard line across my cheeks, and under my beard, mostly for the clean look it gives, but also because those pesky neck beard whiskers seem to have a mind of their own, and will grow almost contrary to the rest of my beard. But for the newbie beardsman, getting those beard lines right can be tricky, and attempts to fix one side so it matches the other can lead to taking too much off, which leads to taking more off the other side to match, etc.. BeardGains makes a great beard trimming accessory to help with that, called Beard Symmetry 2.0, and it offers handy guides for cheek lines, mustache lines, and necklines, as seen in the video below, and using it is as easy as following a stencil.

One new (to me) beard grooming product isn’t really for your beard at all, at least not directly, as it’s meant to give your body the right nourishment necessary in order to grow longer, stronger whiskers. The product is … wait for it … beard vitamins. Yup, beard vitamins. Even though I’ve been taking supplements and vitamins on and off for years, and can see the value in maximizing nutrients, I was still a bit skeptical about beard vitamins until I started taking them. The Beard Gains Growth Nutriment Daily Vitamins product description says it’s for those with “patchy spots, dry or thin beard, dandruff, itch, breakage, or just slow facial hair growth,” none of which I have, but I’ve noticed an increased volume in whisker growth over the last month (along with some seriously strong fingernails, thanks to the biotin in the beard vitamins), so if you’re a “slow bearder,” you might think about giving this product a try.

Hands off that beard

One final beard pro tip I can offer you is to keep your hands off your beard. By that I don’t mean you shouldn’t stroke your beard occasionally, or run your fingers through it to keep it under control, but you shouldn’t be constantly fiddling with it or tugging whiskers as a habit. Playing with your beard is OK, but manhandling it and groping it all day long can lead to a dirty beard, split ends, and sometimes even compulsively pulling out the whiskers (trichotillomania). Instead, get a good beard comb that you can carry with you (and maybe a pocket-sized beard balm or oil container), and comb that manly beard out when you get the urge to play with your whiskers.

[I was sent a few samples by Zach Stephenson, CEO and founder of BeardGains.com to use and review, but all opinions, errors, or omissions in this post are mine alone.]