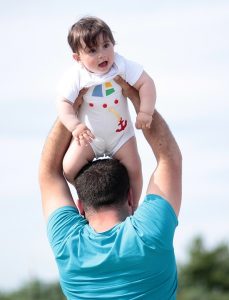 The “Mr. Mom” trope is ridiculously outdated, according to many dads. In this day and age, fathers are expected — and want to — share equally in parental obligations. But according to some media outlets and clothing brands, dads are still considered to be babysitters.

In a March 2017 article in People magazine, a reference was made to the Bahamas vacation superstar Jennifer Lopez and her boyfriend, Alex Rodriguez, recently took together. Nearly 61% of Americans said they’d planned to travel in 2014, and Lopez is no different (other than the fact she can probably afford a fancier getaway).

This choice of words infuriated many modern dads and moms alike, who feel that referring to a father as a “babysitter” is demeaning and misguided. Huffington Post contributor Abby King was quick to point out that, had the tables been turned, Chiu would not have described Lopez as “babysitting” their children.

“Babysitters,” King notes, “are crucial pinch hitters stepping in when a parent isn’t available. A babysitter is a neighbor, parent or friend doing a favor or it’s someone you employ and compensate on a regular basis. But when one parent tends to their children while the other parent is at work, a movie, has a doctors appointment, enjoys a round of golf or a vacation, they are being a parent, not a babysitter.”

Not only is the father’s role in childrearing underplayed, but their abilities are frequently underestimated.

The “Daddit” community on Reddit exploded when one user posted a photo of a children’s onesie on a thread. While kids’ clothing may not seem very inflammatory, the message on this piece irked a lot of fathers. The shirt featured text exclaiming, “This shirt is Daddy-proof,” with arrows indicating where the child’s head and arms should go, and an arrow pointing to where snaps should be fastened.

One user commented, “This makes me irrationally angry.” Another said, “Hate the stereotype that dad can barely hold it together with kids. I am a super-involved dad.” A third user noted, “Like someone else mentioned — we don’t babysit, we parent too.”

Some of the dads even bonded over sexist comments they’d received in regards to their parental involvement. Many have heard references to “babysitting,” while others recounted strangers asking the whereabouts of their children’s mothers on outings.

Another father even commented on the lack of changing tables in men’s rooms, illustrating how far society has yet to go with equal parenting.

Although many women are locked in a struggle to be recognized for their efforts, it seems dads are often lacking acknowledgment, too.