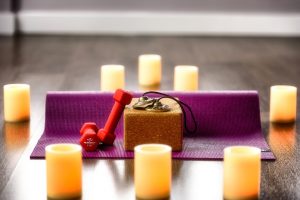 When you lay down your yoga mat and get ready to perform your sun salutations, you’re likely trying to do something beneficial for your health. But a recent study has discovered that these yoga mats, among other items we use every day, may actually be dangerous — especially for couples who are trying to get pregnant.

Even for a couple with normal functioning reproductive systems and optimal age ranges (29 to 33), it can be difficult to conceive. In this scenario, that couple has only a 20-25% chance of conceiving in any given month. But if one of those partners does yoga, sits on furniture, or drives a car, their chances may be even lower. That’s because of a chemical component found in all of these products, known as organophosphate flame retardants (or PFRs). While these chemicals are actually meant to protect us by making these products less flammable, the reality is that they could be doing more harm than good.

According to a study conducted by researchers at Harvard University, which was recently published in Environmental Health Perspectives, women who had the highest amounts of metabolites of PFRs in their urine were 10% less likely to achieve fertilization than their counterparts. These women also had a 31% lower likelihood of embryo implantation, were 41% less likely to achieve pregnancy, and 38% less likely to give birth.

That said, this study isn’t totally conclusive. Not only was the sample size relatively small (only 211 women participated), but all of the participants were patients at one particular fertility clinic in Boston. In addition, the study did not examine any factors that could have contributed to fertility or whether the PFRs came from yoga mats, specifically. Because yoga is such a popular activity for so many women, it seems like the mats may be getting a bad rap without all the necessary facts. However, a separate study published in Endocrine Disruptors actually found that PFR exposure in men may be linked to decreased sperm motility — so it may be worthwhile to reduce exposure to flame retardant materials after all.

In response, study author Russ Hauser made a statement that “couples undergoing IVF and [who are] trying to improve their chances of success by reducing their exposure to environmental chemicals may want to opt for products that are flame-retardant free.”

“These findings suggest that exposure to PFRs may be one of many risk factors for lower reproductive success,” says Carignan. “They also add to the body of evidence indicating a need to reduce the use of these flame retardants and identify safer alternatives.”